I began by learning the Highland Bagpipes and was fortunate to be taught by Roger Huth and Hugh Jameson, who inspired and encouraged me. Later on I started to explore Scottish Smallpipes as well as Borderpipes and German Schäferpfeife . Over the years I have been awarded several prizes for my piping. I have won both the solo piping competition (on smallpipes) and the group competition (on border pipes, with George Paşca on cello) at the Le Sons Continu festival in France, several of the classes at the  Lowland and Border pipers ’ Society annual competition, and I was awarded with a bursary from the LBPS to further develop and stabilise the three octave chanter design for the borderpipe/smallpipe. More to read about this journey and compositions of that time in the 2019 published tune book The Following Tunes.

Scottish bellows blown smallpipes have undergone a revival in the last 35 years. Taking an 18th-century design as their starting point, modern makers have developed them in keys suitable to play with other instruments. I wanted to see if I could create unique music that took advantage of the capabilities of the pipes to create their own repertoire. This has led me down some interesting paths and is responsible for me becoming involved with musical instrument making. 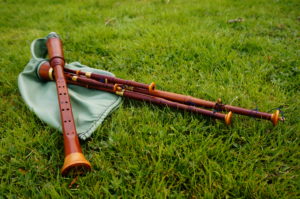 In 2009 I commissioned a set smallpipe from Julian Goodacre which incorporate some new and unique features. These include a drone arrangement that can play in any key, and subsequently various other non-standard chanters (see below). A happy outcome of these initial developments is my great friendship with Julian, which has led to our ongoing collaborating on a variety of projects and new developments.

In 2015 The Lowland and Border Pipers’ Society gave me a grant to work with Julian Goodacre to make a single chanter with extended range possibilities. We developed a chanter with a range of nearly three octaves, which is partially chromatic. It only has four metal keys, one of which is a speaker key to aid jumping into the upper octave.
Listen to the extended range chanter play my tune Rush Hour at the Solo competition at Le Sons Continu festival in France.

My double chanters are made by Julian Goodacre, who developed his design by incorporating two parallel bores in the same piece of wood, each having all the finger holes drilled. With a matching pair of reeds these chanters produce a distinctive and exciting tone and each double hole can be fingered as though it was a single hole. However, I developed a new polyphonic technique for the chanter by learning to slide each finger independently from side to side, allowing me to play different chords. This was quite a challenge! My tune Cutty Sark demonstrates this sliding style.
My first double chanter was in C and since then Julian and I have worked together and refined the design and developed one in A.

Once I had mastered my double chanter, I convinced Julian to make me a triple chanter. With this I have extended my sliding technique on each of the three nine-holed chanters, giving me far greater possibilities for calls and counter melodies. The triple chanter in action can be seen in The Burrito Hurricane.

In order to have enough volume to play in a group with other instruments I commissioned Jon Swayne to make me a set of his Border Pipes in G and requested some extra chanter keys and a complex drone system. This instrument offers me exciting chromatic possibilities and, together with Jon’s low D chanter, was the musical basis of The Savage Prunes Trio, with cellist George Paşca, and fiddler John-Francis Goodacre, which resulted in the CD Straight Line Talking. 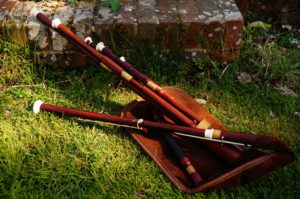 Since then I have commissioned several important ‘add-ons’ to the original set, including a complex ‘Gear Box’ drone stock by Thorsten Tetz and an additional D chanter made by Matthias Branschke. This has resulted in a highly adaptable instrument that forms the basis of my musical duo with German pipemaker Matthias Branschke. We both play low D border pipes and have been exploring the possibilities that this combination has to offer and has resulted in our first CD Antithesis by Branschke Armstrong Duo, released in 2019.

I am very lucky to have an original Peter Henderson set from 1912 which I used to participated in lots of competitions and playing for cèilidh events. Recently I was able to revive the original chanter of this set with a self-made reed.