The aulos was an ancient double reed double pipe played directly in the mouth. We have evidence that it was played as early as 2450 BC and probably fell out of fashion with the rise of Christianity. Double pipes were common all over the ancient world and were also played by the Romans, who called them tibia. 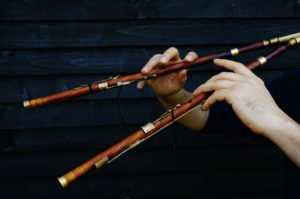 Over the 3000 years of its popularity there appear to have been many different types and styles of auloi. I started by playing a copy of the Greco Roman aulos that is housed in the Louvre Museum in Paris. Since then I’ve been focusing my attention on copies of two species of auloi from the classical period and am currently exploring the musical possibilities of a style of aulos from the 5th century BC. Both of these are made by Robin Howell.

Elgin Aulos with a sliding key system of the Megara
The first is the Classical, 5th Century BC type which was used in Tragedy. These pipes play a tone apart from each other. This particular aulos is a copy of the Elgin aulos in the British museum, with the addition of extender keys like the two Megara auloi, housed in the museum in Megara in Greece. This instrument was made by Robin Howell.

Louvre Aulos
The second instrument is the Louvre aulos which consists of two pipes which play a fourth apart from each other. It was probably discovered in Egypt and is thought to date from between the 2nd Century BC to the 1st Century BC.

My journey so far

I started to collaborate with the European Music Archaeology Project (EMAP), an international community of Classics scholars, musicologists and musicians working to recover the lost soundworld of the Ancient World. Many original auloi from antiquity have fortunately survived, but there is little evidence remaining about the reeds that were used. 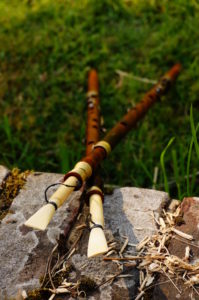 A major part of this project for me has therefore involved developing and making suitable reeds for the instruments, as well as rediscovering the necessary playing techniques.

On this project I became a reed making student of musician and musical instrument maker Robin Howell, and have been working in close partnership with him ever since. I have been striving to create playing techniques using Robin’s copies of surviving instruments, taking advantage of the skills developed from my practical experience of being a piper. My main aim has been to bring the music of the aulos back to life in the most historically informed manner possible.

One of my first public Aulos performances was the concert at Oxford’s Ashmolean Museum in 2017. I also toured as the musician with ATC Theatre’s production of The Suppliant Women by the ancient Greek playwright Aeschylus. This was an adventurous touring production, which travelled throughout the UK and Hong Kong from 2016 to 2018. In 2019 I was commissioned by Columbia University to compose  and perform the aulos parts for Barnard Columbia Ancient Drama’s Herakles and travelled to the USA to be the solo aulos player for their off-Broadway production of the play.

In 2019 I collaborated with Max Brumberg to give our first aulos workshop together in France, focusing on making and maintaining the reeds as well as playing the aulos. To bring more like-minded people together, Max and I then formed the Aulos collective where more information about the aulos and upcoming workshops can be found.